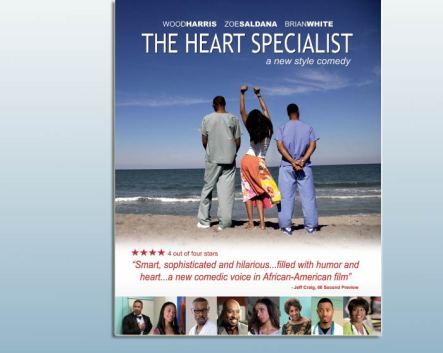 A few weeks ago, I had the distinct pleasure of speaking with actor Brian White.  And just calling him an actor does not do him justice; this man is a youth activist, former lacrosse player, and a licensed stock broker.  It was an absolute pleasure to speak with him about the film “The Heart Specialist” and what he has upcoming.

Brian was initially drawn to the role based on those who were already cast, Wood Harris and Zoe Saldana.  He also appreciated the script because it showed Black people in a role where you don’t often see us-his character, Dr. Ray Howard, is a Harvard educated doctor, and Harris’ and Saldana’s characters have a unique partnership.  In regards to that storyline, White stated, “You don’t get to see the relationship that Wood and Zoe’s characters’ have-a healthy friendship, a respectful friendship. A lot of love there, but you don’t see any sex.  There’s no raw sex.  It’s very classy-a mutually platonic relationship. They’re leading by example, and that’s what Ray sees.   And that’s what people need to see, especially a lot of African-American youngsters.  And that’s one of the messages we wanted to put out there-how to do things the right way.”   Ray lost the love of his life through his womanizing ways but still wanted to hold on to a piece of their relationship.  But through  the tutelage of Dr. Z, Ray was able to grow up.  Through the meataphors of the medical profession, Ray learned how to love.

Education and the next generation of African-Americans are some of the essential elements important to Brian.   He feels that our community is lacking in parental involvement and in educating our young.  On his recent UNCF tour, he was able to visit Cass Tech High in Detroit, MI.  After talking with the principal, Brian learned that students’ performance is not soley based on funds; it’s based on parent involvement; White stated, “It’s based on how many parents help their kids with homework at night; it’s based on how many parents are involved in the day-to-day, moment-to-moment activities of their kids. It’s how many parents are calling the teachers and principals telling them ‘Don’t take it easy on my kids. Give ’em the business-we’ll give ’em the business at home. We’ll tag team them.  They won’t have a chance but to focus.’  Those parents in Detroit do that.  The parents where I grew up in Boston do that.  The parents in Colorado, in Denver, do that.  They’re kicking their kids’ butts, and that’s why schools succeed.  That’s why I’m focusing my energy on our community and encouraging my peers and parents [to become involved].  We can’t say, ‘It’s them’ anymore.  We have a Black president.  We have a leading candidate on the Republican side who’s Black.  The playing field is fairly level and that’s how we take advantage of the opportunities that are available to us.  And if I can use entertainment for anything, it’s to get information out to people to empower them.  Complaints go away and information and elevation happens.”

Brian has TONS of things upcoming!  His latest movie, “Politics of Love”, co-starring Mallika Sherawat, Ruby Dee, and Loretta Devine, premiered in the US, Asia, and Europe.  In February 2012, “Good Deeds” will be released.  And “The Cabin in the Woods” makes its U.S. debut in April of next year.  He also wrote a book, Black Carpenter, the “young person’s guidebook to essential tools for life”, which is currently available on its website at www.blackcarpenter.org and www.amazon.com.  And don’t forget that “The Heart Specialist” is currently out on DVD.

To stay in touch with Brian, you can find him on Twitter at @ActorBrianWhite, on the web at www.brianwhiteonline.com, and to see his tour schedule, visit the Black Carpenter website.  I want to thank Brian for allowing me to interview him.  He has such a warm spirit and genuinely cares about people and leaving this world a better place than when he found it.  He not only talks about empowering others-he’s doing something about it.  For those of you in DC this weekend for Howard’s homecoming, you may see Brian out and about…and your favorite Southerner! 😉  Until next time, I’m just a Southern girl…in the city!