Aaron Arnold has made music his business, so it’s highly appropriate that the name of his company is MusicIsMyBusiness.  I was able to ask Mr. Arnold some questions about his rising empire a few weeks back.  Below is our interview.

Where are you based?

Atlanta, but I have to generally go to NYC, L.A., and Chicago to get the checks.
How long have you been in business?

Three years and some change, but this journey begin in 2005.

Tell me a little more about your company.

MusicIsMyBusiness (MIMB) is one of “America’s Smartest New Companies led by people under 30,” according to Inc Magazine and has also been featured on CNN, GQ.com, Blackenterprise.com, among other sites.  MusicIsMyBusiness is supported by a team of young and innovative individuals who believe that music is the soundtrack to life as illustrated through music’s immense historical and modern influence on the world. These young stars include: Chief Music Technology Officer & Music Director, Jason Murdock and Charles “Chizzy” Stephens, Director of Music and Dominique Brown, COO.  We are a fully integrated music company, which houses three components: 1) MIMB  Music/Publishing (houses artists, producers, DJs); 2) MIMB  Television/Film/Animation; and 3) MIMB Brand Management.  We’ve helped the likes of ESPN, McDonalds, Heineken, The United Nations’ World Food Organization, MTV’s “Making The Band”, Platinum Selling  Artists Danity Kane, Grammy Award Winner Bryan-Michael Cox, and various  agencies in New York, Atlanta and Chicago.

What made you choose this profession?

The need to be happy in life.  I followed my heart.  My heart chose it for me.

Recently, we launched a campaign in conjunction with our first video debut (for “Run it Back”) on MTV at the end of January. We encouraged supporters to view and download the video  and song via iTunes so we can break the top 100.  Heavyweights, like Sean “Diddy” Combs, have already gotten into the act encouraging their fans to support via Twitter. You can view the first music video for “Run-It-Back” on MTV Music, YouTube, and iTunes.

As you know, I made the sacrifice leaving corporate America to become an unpaid intern and assistant to Sean “Diddy” Combs because I wanted to make records and bring the experience back to music as the next generation of music executives and music companies. So debuting this video is a dream come true!!!This is the first single off of the forthcoming MusicIsMyBusiness’ album titled “The Unknowns” and features three rap-artists including MusicIsMyBusiness-Currency Sound rapper Kash, rock singer Tim Z, and Grammy-nominated violinist, Ashanti.  The video was directed by newcomer Ryan Lightbourn. “Run-It-Back” is an energetic uplifting song that fuses rock with hip hop to deliver a story about overcoming obstacles and proving wrong those who told you that it couldn’t be done.  Tell them to “Run It Back”!

Everyone from 8-35 yr olds due to the diverse projects on which we work.

Where do you see yourself and your business in 5 years?

Only time will tell.  In the meantime, I just keep working hard and thanking God for this year and what it will bring us as a company.

As you can see, Mr. Arnold and MusicIsMyBusiness are well on their way.  You can find Aaron on Twitter at (MrMIMB) and MIMB on Facebook.  Thanks to Aaron for agreeing to be featured in the Young Entrepreneur Series.  Until next time, I’m just a Southern girl…in the city!

About The Video and Song:  “Run-It-Back” has already aired via several commercial platforms including ESPN and has been added to several viral mediums and college radio stations.  It’s also been co-signed by several prominent DJs, including celebrity DJ, DJ Irie.  CBS and ESPN producers praised the song for it’s “commercial cross-over appeal”.  “RUN-IT-BACK” is produced by MusicIsMyBusiness top producer Charles “Chizzy” Stephens and executive produced by Aaron Arnold. 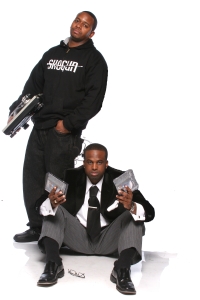 The re-development and gentrification of midtown (New York) pushed many blacks out of the Metropolitan area. As a result, African-Americans began moving to Harlem en masse; between 1900 and 1920 the number of blacks in the New York City neighborhood doubled. By the time the planned subway system and roadways reached Harlem, many of the country’s best and brightest black advocates, artists, entrepreneurs, and intellectuals had situated themselves in Harlem. They brought with them not only the institutions and businesses necessary to support themselves, but a vast array of talents and ambitions. The area soon became known as “the Black Mecca” and “the capital of black America.”