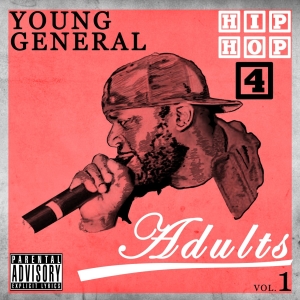 This weekend I was able to speak with Young General, a rising emcee based in Chicago.  Young General’s new mixtape, “Hip-Hop 4 Adults”, will be released today.  Check out our interview below.

Elle: How long have you been in the music business?

Young General: I’ve only been doing this professionally for about a year and a half, but I was always close to hip hop as a fan and recreational emcee before I got serious.  So I’ve been rapping since high school, but just recently decided to make music my business.

Elle: How did you get started?

Young General: I started on the battle circuit in Minneapolis, MN (my hometown) and also down at Florida A&M University when I was in school. I did a lot of rapping there, and it just progressed into something larger.  The music didn’t really get big for me until I got to Chicago and plugged into the hip hop scene there; the market in MPLS is so small that it’s hard for an artist to find outlets for hip hop.

Elle: What can your audience expect from your mixtape?

Young General: ”Hip-Hop 4 Adults” (HH4A) is really a collection of music I’ve been working on for about a year and half, and it’s just like it says-grown-up music.  A lot of people think that the title of the mixtape means the lyrics and content are going to be explicit but it’s just the opposite; it’s more about thoughtful/clever lyrics that describe what it’s like to be Young General today.  Hopefully people will feel like they know me when they listen. I try to be honest and share some of my experiences when I write.

Elle: Who are some of your musical influences?

Young General: Jay-Z was the first hip-hop artist I really attached to when I was younger. “Reasonable Doubt” is STILL my favorite hip hop album, ever.  I’m also a big J. Cole fan. I feel like hip-hop needs what he brings to the table as an emcee.  I also really enjoy The Roots, Ludacris, Currency, Bun B, etc.  I am also a huge Jazz fan; I really like to listen to jazz to relax. LOL.

Elle: What do you use for inspiration?

Young General: I use my life for inspiration. I try to write based upon the lens I see through and not someone else’s.  I find that normal life brings enough adversity, ups, downs, etc that I don’t need to fabricate anything-just telling the truth the way I see/saw it is enough.  So, my life inspires me to write and make music. What motivates me is that I see people who I consider my peers making money and progress through music everyday!

Young General: Lots!  I’m dropping Hip-Hop 4 Adults Vol. 2 in May with an album dropping in the Fall…so this is just the beginning!

Elle: How do you stay relevant?

Young General: I stay relevant by keeping up with what’s current.  If you have an understanding of what’s going on in the world your music will reflect that.  I also try to do a combination of local events in Chicago as well as national events in cities like L.A., New York, etc.

Elle: Can you tell us a little about your upbringing, personal life, etc.?

Young General: I have strong Midwest roots being born in Detroit and going to high school in Minneapolis.  Growing up in Minneapolis its hard not to gain appreciation for the arts and a diverse music selection. Minneapolis was where I really got into freestyle rapping and battle rapping; there are a lot of really dope underground emcees in that area. After I graduated high school I attended college at Florida A&M University-that was where I really got into commercial hip hop as well as “Down South” music and the underground groups in the South.   After leaving school with my MBA I moved back to MPLS, but eventually ended up in Chicago, and the rest is history.

Elle: Do you produce also or are you strictly a lyricist?

Young General: Mostly I’m just an emcee, but I do a lot of arranging and executive production as I tend to have a good ear for what I want as a finished product.  I have a tremendous amount of respect for true producers who actually create the beats; some of the stuff that you hear these days is amazing.

Young General: Yeah just that I believe strongly in networking, if you are involved with the music business in anyway please reach out to me so we can find a way to work together.  The further I get into the music industry the more I realize all we have is each other, so get at me!

I would like to thank Young General for allowing me to feature him on “Southern Girl in the City” today!  Be sure to check out Young General’s site today at 6 pm when his mixtape is released.  You can also find Young General on Facebook and Twitter.  This emcee is doing big things, so be sure to stay on the lookout and show your support.  Until next time, I’m just a Southern girl…in the city!