If you follow me on Twitter or we’re friends IRL (or at least on Facebook), then you know that I have been OBSESSED with “Scandal” since it premiered earlier this year.  First, I’m a fan of Kerry Washington.  I love EVERYTHING that she does, from “Lift” to “She Hate Me” to “For Colored Girls”.  Kerry is an amazing actress, and I think her starring in a Shonda Rhimes show is fantastic.

If you have not been watching “Scandal”, you are missing out.  Lucky for you, it’s still early in its existence, so you can catch up before next week’s episode.  Last night’s episode was by far my favorite. And I said the same thing two weeks ago, which proves this show is getting better and better.  Even Southern Mom is a fan!

I just had to share with you all that you really should be watching this show.  You have NO idea what you’re missing.  It’s probably the best show on television right now.

Lastly, Benevole, the non-profit I work with in DC, is hosting “Be a Hero” on Veterans’ Day, November 12, which is this Monday.  The event benefits Heroes Place, which is a non-profit that works with low-income and homeless veterans.  From 12-4 pm, we will be at Heroes Place (1204 Queen St. NE) collecting business suits (for men and women) and toiletries to assist their clients.  Veterans have given so much for our country, and there is no reason why they should struggle once they’ve served.  I, and the Benevole team, hope you will come out on Monday and drop off a few items.  I know some of you need to clean out your closets.  So go ahead and bring your suits!  And if you are unable to come but would like to donate, you may do so here.  I hope you all have an awesome weekend, and until next time, I’m just a Southern girl…in the city!

I’ve mentioned on the blog before how excited I am about the new ABC show “Scandal”, which stars one of my favorite actresses Kerry Washington, premiering soon!  Well, this week is the week!  But more importantly, the Black Public Relations Society of Washington, DC, along with ABC and Howard University, are hosting a screening of the show TONIGHT!  To say I’m beyond excited is an understatement!

If you plan on attending, you may RSVP here.  And if you’re interested in becoming a member, you can do so when you sign up to attend.  Get there early, because you want to make sure you have a prime seat!  And if you’re not able to attend tonight’s screening, don’t fret; just tune in on Thursday night.  🙂  Until next time, I’m just a Southern girl…in the city!

Last night, which was one of the rare occasions I’ve been home on a weeknight, I had an opportunity to watch re-runs of one of my FAVORITE shows growing up, “Living Single”.  (I’m sure I’ve given  you my history with this show before.)  And it got me to thinking about one of my favorite shows from my young adulthood, “Girlfriends”.  I tweeted, “The early 90s had “Living Single”; the late 90s-early 2000s had “Girlfriends”. What do we have now???”  I was sadly met with replies that included, “Basketball Wives and RHOA”, “Nothing”, and (my fave from big blogging cousin OneChele), “Reruns”.  Once I read their tweets and really digested their responses, I wanted to cry.  Unfortunately, I don’t see myself, a late 20s/early 30s single lady and her friends and life portrayed on TV.  No, I’m not the girl who’s the singer or dating a rapper or is looking for my 15 minutes of fame and will do darn near anything to get more screen time.  I’m just a simple girl with real life problems but who really has no complaints.

Now, I want to be very careful (because I would like to have this person visit us again), but I respectfully disagree with some of Brian White’s recent remarks in an interview he did with “Hello Beautiful” magazine.  No, I did not listen to the audio, but I did read the article and was stunned by what I saw.  First, let me say that I am a Black woman who was raised by a Black woman and have Black women in my family and in my circle.  I can honestly and wholeheartedly say that NONE of the Black women in my circle behave as the women (or characters) in some of these reality shows.  I did tweet to Brian a while back that I do watch these shows but would not let my (imaginary) children watch them.   Why?  Because I know the difference between reality and fiction.  And I keep my life drama-free; that’s why I watch it on television.  I’m not saying these women don’t exist; I’m saying they don’t exist in my circle, and I definitely don’t believe they represent the majority of Black women.

I also don’t know if I agree that Tyler Perry is holding a mirror up to Black America with characters like Angela from “Why Did I Get Married?”  But I will mention that I really think people are WAY too hard on TP about Madea.  I mean, does anybody give crap to Rickey Smiley for impersonating a “church lady” with the morning announcements on his morning show or Steve Harvey for his antics as “Sister Odell”?  Anyway, I’m getting off track….

I will say that positive images of Black people are missing on network television.  I am happy to see that Shonda Rhimes created a new show for ABC titled “Scandal”.  One of my favorite actresses, Kerry Washington, will be the star.  And the show is based in DC! 🙂  But, I’m not an investigator impersonating a lawyer, so she’s not me in that sense, but I am anxiously awaiting to see what this show brings.

I’ve decided that my 30th year is going to be a year of new, exciting changes in my life.  One thing I would like to add to that is writing, on a serious basis.  It can be a book/short film/sitcom/web series…just something to show my life portrayed for the masses to see.  Like I told my “friends” on Facebook who were going in on “Red Tails” (another post for another day), if you don’t like something, make constructive suggestions…or just do it yourself.  Until next time, I’m just a Southern girl…in the city.

Bloggers Note:  As I began writing, this post took on a life of its own and totally went in a direction I didn’t know it was going to go.  So Part Two will most likely focus on what I really set out to blog about in the first place.

Are you ready for some FOOTBALL?

Are you ready for some FOOTBALL?!?!?  I know I am.  And it looks like the New Orleans Saints are, too, after their win last night against the Minnesota Vikings.  This Sunday, I will be travelling to Capital City Brewing Company to watch my Jacksonville Jaguars take on the Denver Broncos.  And one of my favorite guys is coming to watch the game with me!   Hopefully, the Jags can pull a W this week and have a great season.

I was so hyped about being able to vote early in DC, and procrastinator that I am, I have still not voted.  So I will be out with the masses on Tuesday casting my vote in the DC primaries.  And to add insult to injury, I STILL don’t know who’s getting my vote.  I can say that Vincent Gray is calling for an FBI and Metro Police Investigation into claims that a “Re-Elect Fenty” worker promised 4 district residents jobs if they voted for the Mayor.  Mayor Fenty denies these claims and  is asking that the focus be on the issues.  It’s going to be interesting to see how this turns out.

If you didn’t know, Willow Smith, the 9 year old daughter of Will and Jada, has been signed to Roc Nation, the record label owned by Jay-Z.  While I admit her song “Whip My Hair” is catchy, I feel that it’s a little too grown for someone so young.  And her look is too much.  I feel like she’s a little outrageous for a child.  And Jay-Z had the nerve to call her the “next Michael Jackson“. Ummm, we’ll see, but I doubt it.  There’s only one MJ. 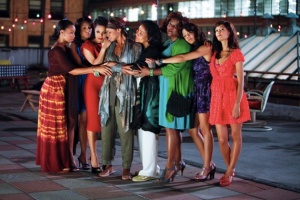 I hope the movie is as good as the book

There is a release date for Tyler Perry‘s new film “For Colored Girls Who Have Considered Suicide When the Rainbow Isn’t Enuf”.  The film is set to be released November 5 and has some heavy Hollywood hitters-Phylicia Rashad, Loretta Divine, Janet Jackson, Thandie Newton, Kimberly Elise, Anika Noni Rose, my personal fave Kerry Washington, Tessa Thompson, Michael Ealy, Khalil Kain, and Richard Lawson.  While I wasn’t so geeked about Tyler doing the movie I hope these stars are able to create a masterpiece on the big screen.  I’ll probably read the book before the movie comes out…

So what’s going on in your world?  Who are you pulling for during Week 1?  And even though Governor Schwarzenegger signed “Chelsea’s Law”, I still haven’t heard anything new about Mitrice Richardson; yes, I will continue to bring her name up so we don’t forget about her or other African-Americans who go missing and no one seems to be doing anything to find them. (I purposefully did not discuss the pastor-I use that term loosely-in Gainesville, FL who has expressed an interest in burning the Qu’ran tomorrow to “commemorate” the 9/11 attacks.   If he wants to recognize that day burning someone’s Holy book is NOT the way to do it.) Have a great weekend, and until next time, I’m just a Southern girl…in the city!