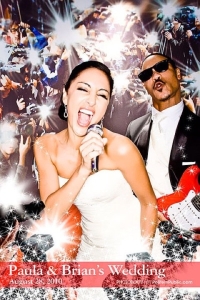 Brian White, you know the cutie from the feature film “Stomp the Yard” and TNT drama “Men of a Certain Age“, got married this weekend!  But everything wasn’t blissful for the groom.  Apparently, some people are hating on Brian and his new bride, Paula Da Silva, because she is not black.  Brian, who is a very vocal celebrity on Twitter, even retweeted comments that his friends made stating that people (i.e. black women) are hating on him because his wife isn’t black.

Apparently, Brian spent some time on his honeymoon giving energy and credence to the people who were not excited about his interracial marriage.  Some people seem to think that his getting married nullifies the rumor that he was suspect, others claim they never wanted him in the first place, and more people could probably care even less.  It appears to me that instead of his giving credence to these people who mean him no good and whom he’ll probably never meet in life anyway, Brian should enjoy himself with his new bride and the life they are going to spend together.  But he really must have been hot under the collar to pay attention to all these people.

So what say you Southern Girl audience?  Was Brian right in giving these people his attention during what should be one of the happiest moments in his life?  Or should he just ignore them?  And is interracial dating even an issue in 2010?  (Oh, it is according to Dr. Laura; we “blacks” have become much more sensitive about race since President Obama has been elected…#please)  Do black women even want Brian White?  Or is this just an example of an arrogant actor getting his rocks off thinking everyone wants him?  Until next time, I’m just a Southern girl…in the city.