Happy Hump Day!  Yes, it’s Wednesday, and once again, there is no “Way Back Wednesday” post…maybe I’ll be back on a regular schedule next week, but I went to this great event last night and wanted to share some highlights and thoughts with you guys.

If you aren’t familiar, AT&T is hosting a 28 Days Speaker Series during the month of February.  In 5 cities across the country, five different speakers will share their stories and encourage us all to “look back with respect and move forward with purpose”.  At last night’s event, Tai Beauchamp was the featured speaker.  She has a remarkable story, from being the youngest Fitness and Beauty Editor at “Seventeen” magazine to starting her own non-profit.  Two things that Ms. Beauchamp said that stuck with me are: 1) So many of us want to be the President, but we don’t want to be the Vice President, Secretary, or Treasurer.  The President has to be able to do everyone’s job, and none of us want to do the work to get to the top.  We just want to get there. 2)  Don’t treat your dream as a side hustle; treat it like a second job.  If we treat it like a side hustle that’s what it’s going to be-something we do on the side and it won’t receive all of our attention.  We have to give our dream our full attention.  Ms. Beauchamp was a great speaker and she had a lot of words of wisdom to share.

Now, let’s talk about Common.  As I told my “Auntie Madeline” last night, “my love for Common intensified tonight.”  That man, that man, that man…He’s so gorgeous in person, he’s eloquent, he’s a nice dresser, and he’s involved and aware.  Yes, I know I should be more concerned with who he is as a person, but let’s be honest-the man is nice to look at and even moreso in person.

I thoroughly enjoyed myself last night, and I love attending events that bring to my attention others who are doing something positive and have a great story to tell.  I have started following Ms. Beauchamp on Twitter, and look forward to possibly hearing her speak again.  And you know any chance I get to see Common, I’m going to take full advantage of it! 🙂  If you live in NY or LA, check out the calendar here to see if you can attend the last two series.  (Hopefully they’re not sold out!)  Until next time, I’m just a Southern girl…in the city!

Oh, one last thing- Something weirdly odd (nothing bad, though) happened as well.  Tai mentioned various African-American women who made their marks on this country.  The first woman she mentioned was Madame C.J. Walker.  I told Madeline she must have read the blog (as Walker was my BHM fact yesterday)!!! 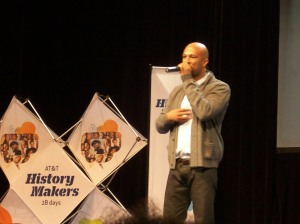 Maynard Jackson was an American politician and the first African-American mayor of Atlanta, GA.  He served a total of three terms and was first elected in 1974.