Happy Hump Day!  Today’s post is a mixture of “Events Week” and “Way Back Wednesday”.  Thanks to my homie, road dawg, soror, sister, and friend @OriginalNajeema, I was first introduced to MOCA last year…or was it 2009?  In any event, MOCA (Museum of Contemporary Art) DC has an exciting exhibit going on from March 4 until April 2.  There was an opening reception last Friday, which was attended by over 200 people.  For the next few weeks, various events will be taking place, such as a special meet-and-greet just for models, an open house, a closing gala, and DMV Nude.

I have to admit when Najeema took me to DMV Nude last year I was slightly intrigued and a little nervous.  I was expecting naked people to be walking around everywhere.  But it was far from that.  There were really cool backdrops and interesting lighting that allowed photographers to take pictures, and some artists were using models as a human canvass-yes, people were getting painted and then having their photos taken.  I think that would be ultra-cool, but I’m not that unhibited and I need to tighten up a little.  I can say I was truly able to appreciate the human body as a work of art.

If you want more information about MOCA, go visit the website here.  Most of the events are free, but they do ask for a donation to help keep the gallery open.  I may try to attend some of the events this year.  If you’re able, you should definitely attend.  Until next time, I’m just a Southern girl…in the city!

I hope you all are getting ready for “Boxes” The Play in 2 weeks!  Tickets are going fast, so you may want to get yours quickly!

I had the pleasure of speaking with the writer of “Boxes” Ebony Custis last week.  Read on to find out more about her, RoseProse Productions, and her upcoming play.

How long have you been writing plays?

Since 1997. I studied under Caleen S. Jennings during an internship at American University. She taught me about analyzing dramatic literature and how to create interesting characters and story lines. I’ve been writing plays ever since.

What can the audience expect from this play?

BOXES will make audiences think; ‘What could I do if I stopped hiding? Stopped being afraid of what would happen if I took a chance?’ They’ll be forced to wonder about the conversations they’ve been too terrified to have and ask themselves how their lives would improve if they would just go ahead and tell the truth!

What did you use for inspiration for this play?

BOXES asks the question ‘If you knew you were capable of greatness, what would you do tomorrow?’ I asked myself that same question in 2008. For me, the answer was ‘ I would write and share my writing around the world. So I did. BOXES was first staged in Trinidad and now we’re preparing for our second show in DC.

I drew inspiration from the realization that I am not the only one with big dreams and big fears. I’m not the only one who allows fear, past disappointments, and the opinions of others to hold me back. I wanted to write something that would help myself and others get beyond those obstacles and start turning dreams into reality.

In BOXES the audience will meet every day people in the same situations we find ourselves in. They are trying to be their best self but something is holding them back. So, the characters have to choose; will they remain stagnant or will they decide to move forward.

Where else has this play been performed? Do you plan on taking it anywhere else?

BOXES was first staged by the Trinidad Theatre Workshop in Port of Spain, Trinidad.

I’d really like to bring BOXES back to DC for a longer run in the near future. I’d also like to stage it overseas in another language. My top picks are Salvador Bahia and Merida Mexico but I’m open to other places if the opportunities present themselves.

How long has RoseProse Productions been in existence?

Unofficially, RoseProse was born in 2000 when I self published my first book of poetry ‘My Moments.’ However, it wasn’t until 2008 that I really solidified the vision and mission of RoseProse. In 2000 I was writing poems, essays and plays and it was a useful time in my life because it helped me to grow into a better writer. Now, I write poems, plays, and novels for a specific purpose:

RoseProse Productions offers entertaining and motivational literature in the United States and abroad to encourage cross-cultural understanding by emphasizing commonalities of the human experience.

What other plays have you written?

My first play was a one-act ‘The Tree House.’ My second one-act ‘Strange Reflections’ won the College Language Association’s first prize in Dramatic literature in 2001. I’ve also written other one acts as well as two full length plays; ‘Taylor’s Gift’ and ‘The Watering Hole.’

Taylor’s Gift explores how the gift of religion is tainted when institutions and greed are allowed to overshadow the simple message of unconditional love.

Are there plans for another play?

Absolutely! RoseProse will stage ‘The Watering Hole’ at the DC Arts Center in Adams Morgan in May 2011. The play asks the question “If you could change yourself, who would you become? And what would you be willing to sacrifice to make that change?’

What can your audience expect next from RoseProse Productions?

I’ve always been an avid reader and I came to realize that there is, unfortunately, a clear divide between good stories and motivational literature.  Good stories take you on a journey. We remember the characters and we feel like we’re with them every step of the way – the stories take us out of ourselves. Motivational literature makes us focus on ourselves and how we can be better. I love literature that does both -but sometimes it’s hard to find. Now, of course, there are exceptions: Paulo Coelho, Tennessee Williams, Toni Morrison, George Orwell, Ayi Kwei Armah, Elizabeth Gilbert and others, but not enough. I’d like to be one of those exceptions. To grow the body of entertaining motivational literature.

Have fun. Stay healthy. And if you’ve got some spare time on Dec 6 or 7, stop by Source and see BOXES.

You heard it here, folks! Go get your tickets and stop by the Source Theater.  I will tell you Elle will be there opening night!  Until next time, I’m just a Southern girl…in the city! 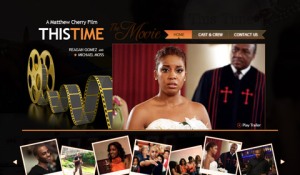 Reagan Gomez, the older sister Zaria on “The Parent ‘Hood” and the current voice of Roberta Tubbs on “The Cleveland Show“, wrote a movie entitled “This Time”.  This movie, directed by Matthew Cherry, deals with “the realities that many people have to face when a loved one returns home from war and everything has changed.”  The movie stars Terri Vaughn, Michael Moss, and Reagan Gomez.

As someone who works on a military base and works with current and former military personnel, I am very sensitive to the facts of soldiers being deployed and the issues they go through overseas.  This was an excellent depiction of what things are like when a soldier returns home and finds the love of his life is about to belong to another.  Even though it’s a short film, it’s very powerful.  I truly believe this movie should be turned into a feature film.  There aren’t too many movies that tell the story of what happens after a soldier comes home.

The movie is currently on YouTube and has been submitted to numerous film festivals for awards.  Even if you don’t know anyone who has been deployed, I believe all viewers can relate to the plot.  If you’ve seen the movie, what do you think?  And if you or someone you know returned home from war, what was your experience like back home?  Or if you’ve ever been in love with someone and they belonged to someone else, how did you deal with that?  Until next time, I’m just a Southern girl…in the city.