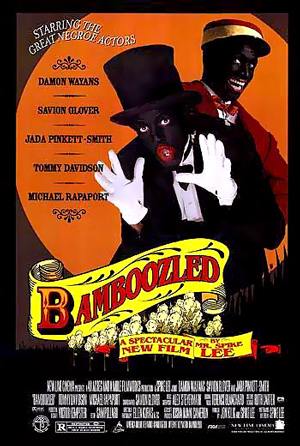 The promotional poster for "Bamboozled"

Last night, I was watching one of my favorite movies (and probably Spike Lee’s most under-rated motion picture), “Bamboozled”. If you’re not familiar, this movie is a satirical film that focuses on a modern day minstrel show and shows the fallout of those involved.  (I remember being excited about this film during my freshman year at FAMU, and I’m sure I went to go see it with multiple friends, but the only person I remember being in the theatre with me is my boy Brew.)  If you haven’t seen this movie, you need to find it and watch it.  Actually, my first Black Movie Night this summer will probably be this film.

Watching the film last night had me thinking about the modern day minstrel shows we have on television now.  Show producers don’t have to find any actors to play in these shows.  Why?  Because they can find people who want to be “famous” and will do darn near anything for a buck.  Since this movie was made in 2000, there have been multiple shows that have come out that have been minstrel in nature, such as “Flavor of Love”, “I Love New York”, “Frankie & Neffe”, and “Real Housewives of Atlanta”, just to name a few.  And with the exception of “Frankie & Neffe”, yes I, too, contributed to the tomfoolery and was a viewer of each of these shows.  I lived to see what crazy antics would take place.  Probably because I live a drama-free life and wanted to see how foolish people would actually behave on national television.

So, what do we do?  Do we continue to watch the public image of Black people deteriorate back to the days of Mantan Moreland, William Best, Lincoln Perry, and Bert Williams?  Do we allow these images that we see on our tv screens to define who we are?  I don’t think so.  As Pierre Delacroix stated in “Bamboozled”, Black people are not monolithic.  We’re more than rap stars’ and atheletes ex-girlfriends and ex-wives.  We’re more than a washed up rapper looking to regain his 15 minutes in the spotlight.  We’re more than an R&B singer’s birth family who’s looking for our own celebrity.  We’re more than some women who think we’re more important than we are just because we have some money and live in a mini-mansion.

We’re first generation college students who go on to have successful careers in social work.  We’re entrepreneurs who hustle to see our businesses succeed.  We’re people who fight for our country and serve with grace and poise.  We’re immigrants from other countries who strive to make a great life for our families.  We’re people who work hard and play harder.  And sometimes, we’re just a Southern girl living, laughing, loving, learning, and making her own way…in the city.