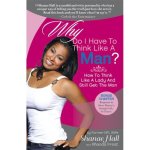 So, I had some time open up this morning. Actually, I don’t think I really did, but I’m going to take some time based on 2 posts (well…one and a quarter) I just read and feel the need to rant a little.   This could also be based on the night I had last night, too.

It appears that everybody and their momma is writing a relationship book.  Steve Harvey’s “Straight Talk, No Chaser” will be number 1 this week on the New York Times Best-Sellers list, the men of Very Smart Brothas have written a relationship book that will be released next month, and Shanae Hall, radio personality on Jamie Foxx’s Sirius satellite station “The Foxxhole” wrote “Why Do I Have to Think Like a Man?” in response to Harvey’s first book.  I CAN’T TAKE IT ANYMORE!  We get it-everyone’s single and is complaining that they don’t know where to meet quality men/women.  Everyone thinks celebrities, who don’t know them or anything about their personal lives or the people in them, can give them advice and the secret to finding their one true love. 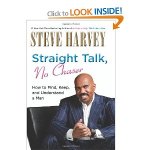 While I definitely think we need to look internally as to why certain things happen in our lives, sometimes who we come into contact with has an effect.  Case in point, last night I went to the Baltimore Quarterly Social hosted by our favorite matchmaker, Paul Carrick Brunson.  Not to say anything bad about Mr. Brunson, but not all 0f the men present were there for the same reasons the ladies were.  Women were taking this event VERY seriously and were ready to meet some quality guys that with which they could build a potential relationship.  The guys were there to have a good time.

I say all of this to say, no matter what a comedian, fellow bloggers, or a former NFL wife write in a book, my going out is not going to guarantee that I meet a man who wants the same things I do.  I could go to singles’ mixers, church, a sports bar, or wherever else people say you can meet a man, and leave empty-handed, disappointed, and thinking something’s wrong with me.

What do you guys think?  Have relationship books been around forever but just making their way to the Black community?  Have the steps or advice in a relationship book helped you to find someone?  Or are you sick of them just like I am???  Until next time, I’m just a Southern girl…in the city!

“I shouldn’t have left you, left  you, without a dope beat to step to…”

Hi, guys! Yes, I know it’s been a while, and I’m so behind and off on stuff!   Things are a little crazy in Southern Girl land, but I will be sure to catch you guys up before the holiday! Until then, enjoy your week, catch up on some old Southern girl stories, and I’ll be in touch!  Until next time, I’m just a Southern girl…in the city!