So, I was all ready to do my post for WBW, had the subject and everything!! Then I came across this article on Vibe.com, which talks about the disappearance of the Black sitcom.  So this got me to thinking about television from the 80’s and 90’s-the shows that had diverse, complex, funny Black people who went through real-life issues…and how those shows are almost non-existent now.  It is amazing what a 30-minute sitcom can do to your soul.  When I was younger, I got a kick out of these shows, but as an adult, I totally understand what the characters were going through.  And amazingly, I can still laugh at them.  So today we’ll go back to some great sitcoms that had a mostly black cast. 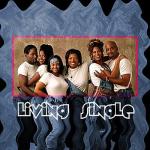 First, I cannot have a list of black sitcoms and not mention my favorite “Living Single“!!!  This show was my life-yes, even though it premiered when I was in the 6th grade!!!  I had a group of 5 kids I ate lunch with each day, and we each had a “Living Single” alter-ego, and ironically, I was the only black kid in the group.   I was Max, because I wanted to be an attorney, was a bit of a smart aleck, and had a love/hate relationship with the guy whose alter ego was Kyle.  I always tell anyone who will listen that “Friends” was a spin-off of “Living Single”; some look at me like I’m crazy, but I know that of which I speak.  “Living Single” premiered in August 1993; the NBC sitcom didn’t premiere until over a year later.  In any event, I love this show, and still watch the re-runs on TVOne and Oxygen.

“Sister, Sister” was the world’s first introduction to Tia and Tamera Mowry.  While I thought the premise was a little far-fetched, I loved this show had girls who were close to my age going through the things I was going through.  Lisa, Tia’s mom, was a riot, and Tamera’s dad Ray was the strict one.  I didn’t really start liking the show until the twins started straightening their hair.  I felt like that’s when they officially grew into young women. (Don’t judge me; I was only 14.)  This show was great for any young girl who was dealing with the perils of growing into young womanhood.

“Roc” was that show!!!  Who knew a show about a trash collector and his family would be one of the most innovative, interesting, and informative shows on television?  Roc dealt with taking care of his dad and his trumpet playing, smooth talking young brother.  And who could forget his wife, Elinor??  She was the backbone that held the family together, and she LOVED her man!  Roc took in his friend’s daughter when he went to prison defending the neighborhood and stood up to the neighborhood drug dealer.  “Roc” was only around for 3 seasons, but it made history.  It was the only prime time American show since the 1950s to broadcast an entire season live.  There was a ton of talent on that show as all four major cast members were well acquiantanted with each other through their appearances on Broadway.

The show that is responsible for so much in my life is “A Different World“.  This show introduced me to the first Black Southern Belle, Whitley Gilbert.  This show, along with the influence of my parents and other family members, aided in my decision to attend and graduate from an HBCU.  This show taught me so much about my culture.  And for you die hard fans, you all noticed a shift between the 1st and 2nd seasons, when Debbie Allen, a Howard University alum, came on the scene and re-vamped this show so it was more authentic and represented a true HBCU.  Every Thursday I was glued to the tv, and there came a point in time when I wanted to watch “A Different World” more than I wanted to watch “The Cosby Show”.  I was happy that Dwayne and Whitley FINALLY got together.  The “Wedding Episode” is still my favorite.   I wonder if there will be another show created to show my children what life on a Black college campus is like…

Some shows that need to be mentioned (and some that don’t just because we all know them) are: “Amen”, “227”, “The Cosby Show”, ‘The Fresh Prince of Bel-Air”, “The Steve Harvey Show”, and “For Your Love”.  I could be here all day naming shows, but I’ll save that for you guys.  What were some of your favorite Black sitcoms growing up?  What shows do you miss?  If I were a writer, I would LOVE to create a sitcom starring African-American characters.  But do you think a sitcom starring Blacks could survive on network television in 2010?  Until next time, I’m just a Southern girl…in the city.