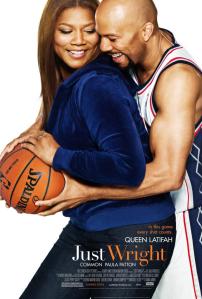 I FINALLY saw “Just Wright” this weekend! (Hey, don’t judge me!)  As it has been out for awhile, I had a hard time trying to find a theater where it was playing, but found one I did!  While doing some research, I happened upon Yahoo, one of my favorite sites, which gave me the theater info.  It also gave me ratings, the viewer rating and critic rating.   The critic rating was a C+, while Yahoo users gave it an A-… So that gets my mind to turning, why the big disparity?  Are the critics wrong or is the audience off their rocker?  With over 1,000 Yahoo users commenting, I’m going with the critics are wrong.  But do they go to school, is there a seminar they take?  Seriously, how does one become a respected movie critic, someone that people listen to and respect their opinion?

There’s another movie I came across, “Valentine’s Day”, that I loved, but once again, wasn’t a big hit with the critics, but Yahoo users gave it a B-.  Actually, I looked up the movie in hopes of proving a point, but I was happy to see that the point I was planning on making wasn’t valid.  So, maybe you know something I don’t.  Do you know what movie critics have to go through?  What makes newspapers and other publications hire them and value their opinion?  Inquiring minds want to know.  Until the next time, I’m just a Southern girl…in the city.